Seems like the drama from the Big Brother House extended beyond the house.

Less than 48 hours since the winner of the Big Brother was announced, quite a number of things have happened to the housemates after leaving the house.

Here are a few.

Less than 24 hours after Nina was evicted at the final ceremony,  She got an endorsement from Flawless Beauty by Mimi Brand. The company wrote the message on their Instagram page stating the desire to sign up the fourth runner-up at the controversial event.

And Another One!  Nina Bags Another Endorsement Deal alongside CeeCee

Seems the Big Brother House brought more fame for Nina as well as endorsements as she bagged her second endorsement with another brand, Slim Girl Shapewear, a Lingerie, Shapewear & Swimwear supply shop in Nigeria.

Nina wasn’t the only who got the deal with the brand whose former Ambassadors  were Khloé Kardashian, Blac Chyna, Amber Rose, Toya Wright, Reginae, Tiny.

Controversial Housemate, Cynthia  whose famous temper drew attention among audiences of the Big Brother Naija Show, also got an endorsement from the fashion house which till date had no african ambassador.

Apart from their romantic affair in the house. Seems like the couple are winning together

After getting two quick endorsements just days after leaving the house, Nina alongside her in-house boyfriend and winner of the big brother competition, Miracle, were promised another reward by Son-in-Law and Chief of Staff  of Imo State Governor , Uche Nwosu, for making the state proud.

“My special gifts await Miracle and Nina for making our great state proud. “ And for promoting the free education and the rescue mission of the state government while in #bbnaija house.
He also said that he would make sure they were rewarded by the government of Imo for their good works.

He tweeted, “I’ll also discuss with Gov. Rochas Okorocha to see that @officialninaivy and @miracle860 get honoured by the Imo state government. “They have represented us well on the @bbnaija platform.”

After winning the whopping sum of #25million Naira, a year supply of Pepsi and Aquafina etc. Popular Singer, Tekno also promised the winner of the big brother Naija show another 1 million.

After he took to Twitter to congratulate Miracle on his big win.  Tekno added that he has a million or two to give to Miracle.

CeeCee gets 2 Million from Fans 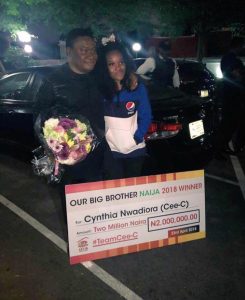 Although she did not win any cash prizes from the Big Brother House her fans came through by surprising her with a cheque of 2 million naira.

She received the cheque when she arrived at the airport where her fans were waiting to welcome her.

Other fans on social media gifted her with 1million naira, 500 thousand naira, an iPhone X and designer clothing. It is also reported that she will be going for Anger management classes.

*Sighs* What a relief!

Although she wasn’t in the top 5, she still seems to be winning

This happened about 24 hours after the end of the third edition of the 2018 BBNaija TV reality show titled “Double Wahala’’ on Sunday.

While in the house, she was romantically involved with Teddy A who was her strategic partner.

The pair appeared to have taken their love to another level, as Teddy A organised a surprise birthday party for her.

In a post on Instagram, Second runner up, Tobi’s mum met Third runner-up , Alex mum shortly after the pair arrived in Nigeria and from the video on Instagram, it seemed like a merry event.